Cutting of the 2023 Vasilopita-cake, inauguration of connecting routes and office 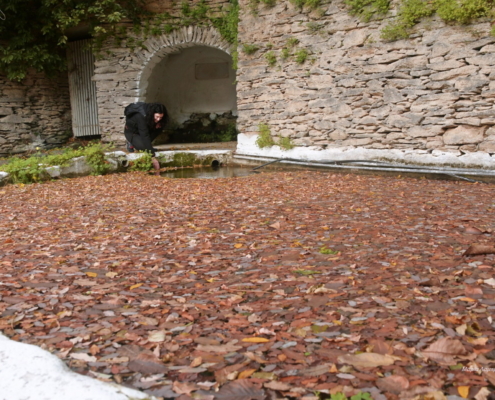 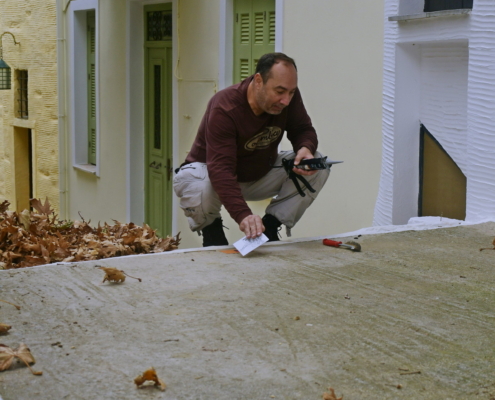 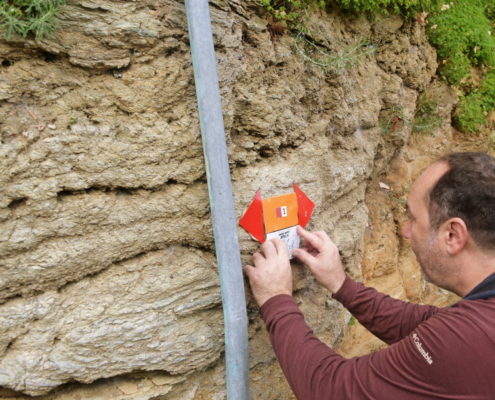 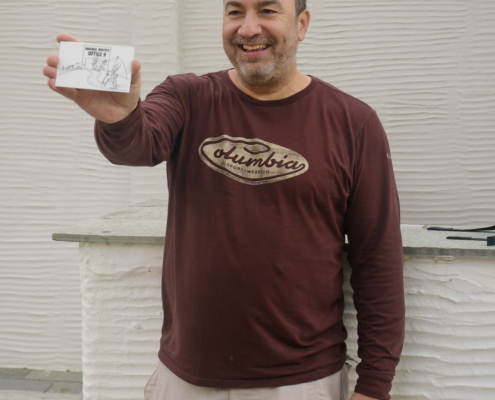 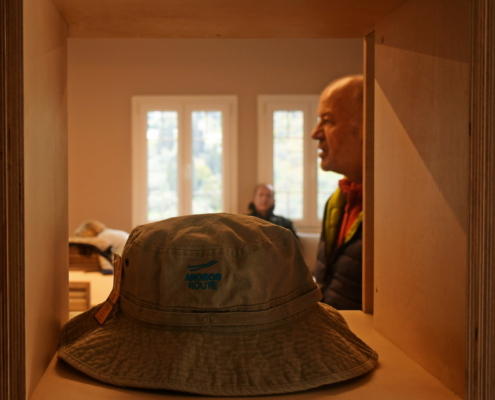 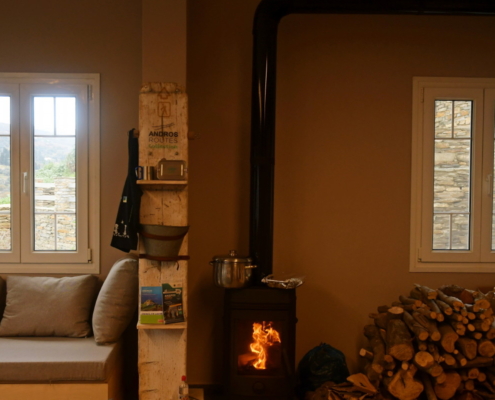 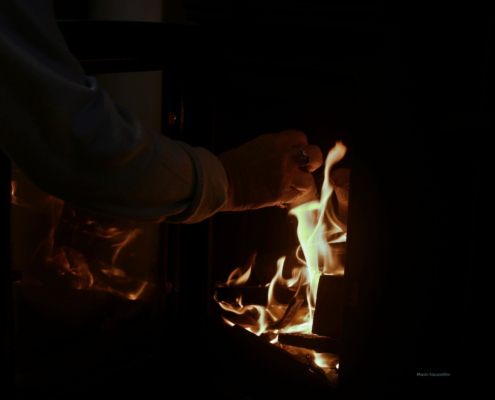 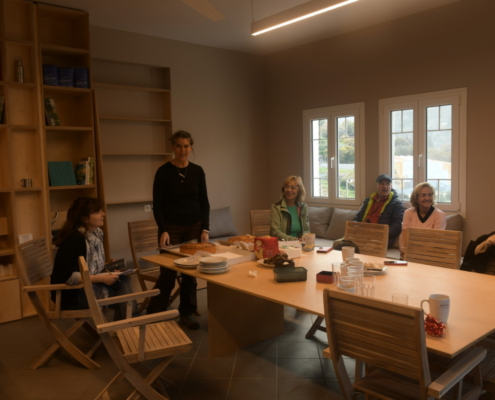 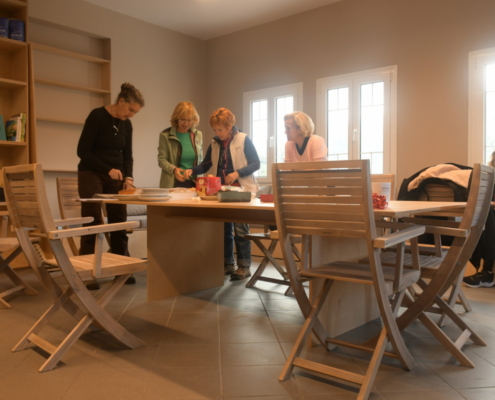 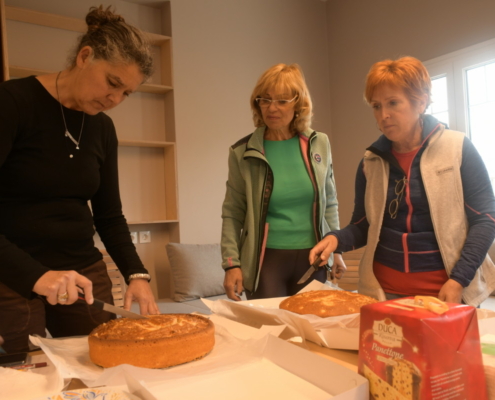 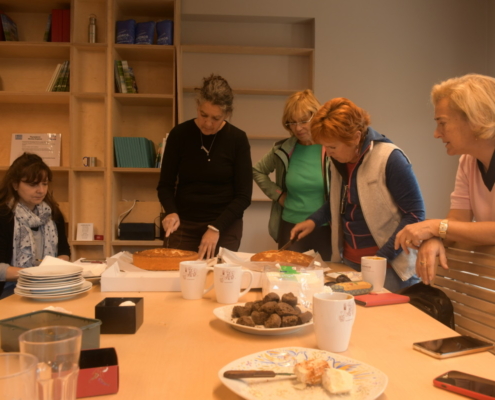 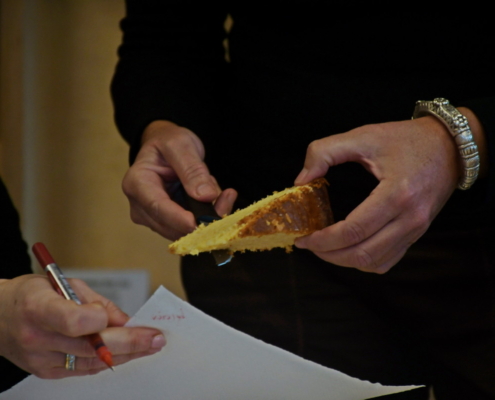 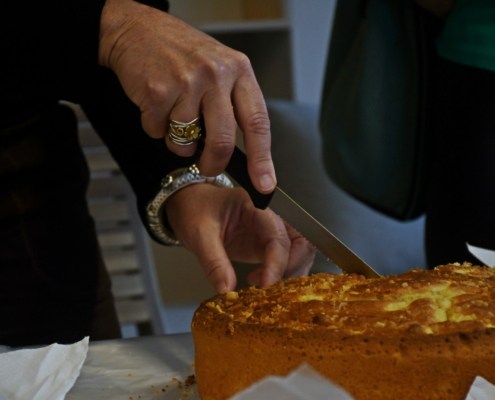 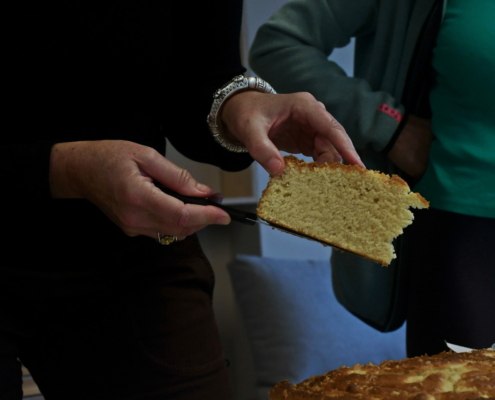 In the framework of an action sponsored by “ΕΣΠΑ” (= NSRF, Enterprise Agreement for the Development Framework), its implementation having started in mid-2022, the Andros Research Centre with its projects “Andros Routes” and “Clean, Green Andros” has acquired a headquarter!

The acquisition of a headquarter is a precondition for the NSRF support and the action entitled “Discover Andros Heritage” aims to create digital maps and a mobile phone application for the signposted hiking network of “Andros Routes”.

Our office is located near Agios Spyridon of Messaria, at a point where many paths from Lamyra, Messaria and Livadia merge. There, at our office, facing Lamyra, on Sunday 8 January we cut the Vasilopita-cake of 2023! Along with the cutting of the cake we inaugurated the routes that basically connect footpath no.1 with footpath no.17. Via these “new” routes a hiker can hike from the Lamyra Primary School to the Livadia River and all along this route barely walking on tarmac!
Before the cutting of the Vasilopita-cake, we did a long walk around our office, an introduction to the “new” old route for all of us.

We took the path behind the church of Agios Spyridon, which leads to the bridge of Kanakis and after climbing the endless steps of Lamyra we reached the former primary school of Lamyra. Then we turned back and at the bridge of Kanaki – below Agios Spyridon – we turned towards Messaria, crossed the motorway and through Kapsorachi we arrived at Mesa Chorio of Livadia (below Agios Eleftherios). We returned to our office by walking up the old path that connects Sotira (Livadia highway – estate “Manitari”) with Agios Spyridon. This slightly steep path has a great view of Livadia, Vrachnou, the cypress clusters of the valley till Paraporti, the monastery of Panachrantou and the village of Fallica. All along the route we installed the corresponding signs.

As it is customary in Andros, all events are accompanied by food; we were no exception, because we stick firmly to our traditions! The treats were many; the Vasilopita-cake was cut to fifty (50) pieces, each one for each Andros Routes volunteer! The coin was found by Angeliki Katechou who we wish her to have an excellent year. Angeliki – along with the coin – was awarded some Andros Routes products. The many pieces of the pie were eaten, of course… by the present participants! You didn’t come = you didn’t eat!

The two Vasilopita-cakes were offered by Myrto Apostolopoulou. Chrysoula Grammatikogianni made kourabiedes and dolmades. Anna Kalatzi made the pita and soup with liraki, that stayed warm throughout the event on the wood stove!

May we stay in good health, may we have a good hiking year walking on the paths of Andros. Happy New Year to all of you!

A small part of path no.17 is closed for a few days 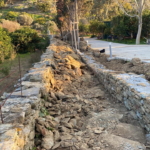 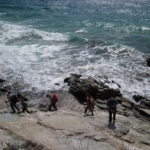 On Sunday let’s hike at the beautiful circular route of Aprovato!
Scroll to top