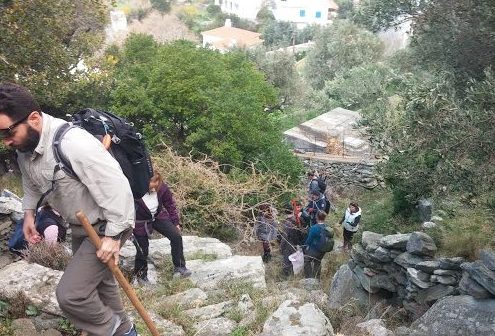 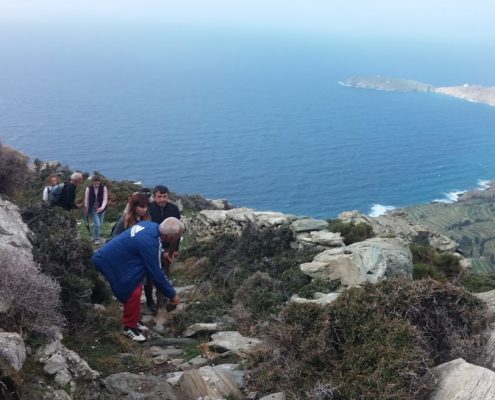 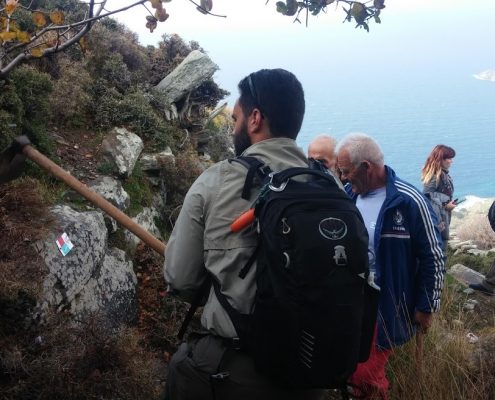 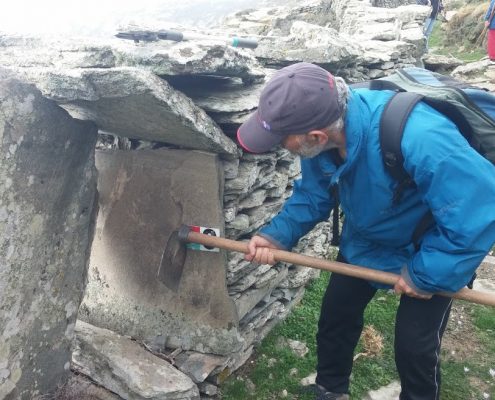 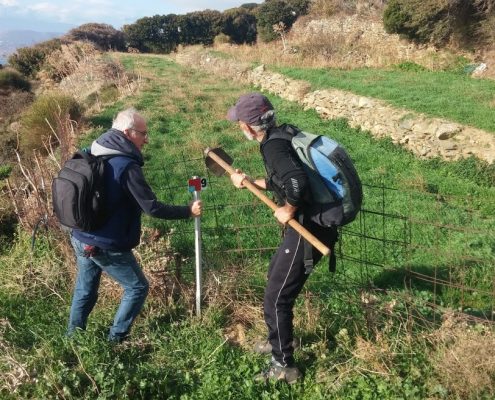 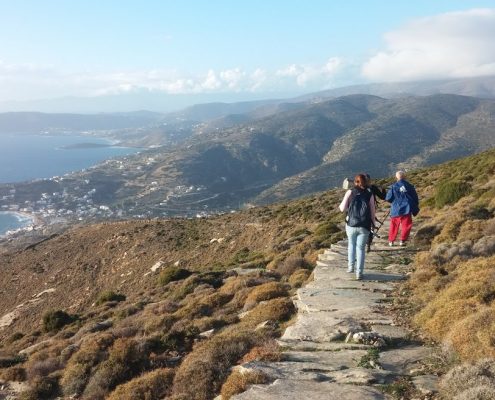 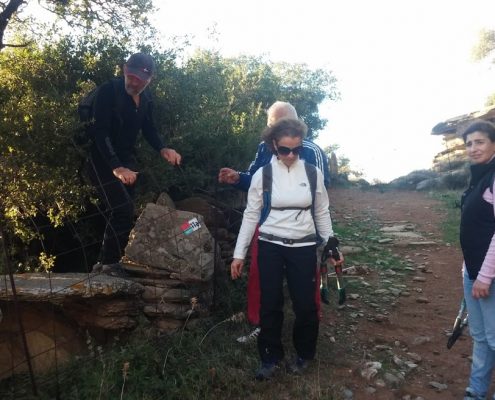 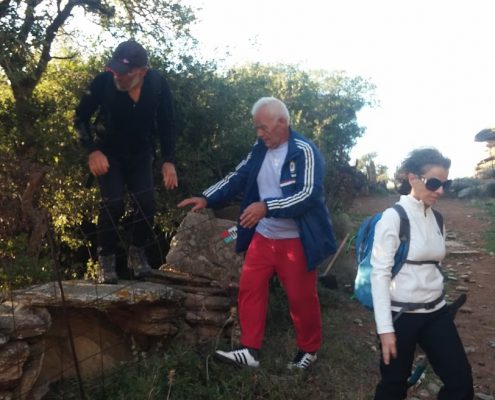 The weather forecast wasn’t good and our 18th maintenance hike of the year on Sunday 17th December was looking doubtful. However, this is Greece and as so often she was being generous. An hour from the scheduled meeting, our phones were buzzing, should we or shouldn’t we go? We risked it, and soon after we set off, the sun came out and shone brightly for us for the rest of the day.

Our numbers were depleted because of the forecasted ‘bad’ weather but in the end we were a brave 12 from various areas of the island, Mermigies, Felos, Gavrio, Ano Gavrio, Batsi, Mesathori, Chora, Plaka, Katakalei, as well as from Athens and Germany!

The initial uphill with the steep cliffs and elevations above Palaiopoli gave us wonderful views across the ancient valley and coastline. Continuing on the on the ridge to Aprovatou brought us to the waterfall that had little water for the season.

Here we came across some unpleasant surprises….

….. a dirt road that had be opened in this area in previous years has been extended and as a result the historic ancient paved path of Fardia Stratashas been completely destroyed;

…. The ravine where the largest and most spectacular of Andros’s waterfalls flows has been completely fenced off denying access to one of the key sights on the island for walkers.

Our emotions ran high, some of us angry, some of us sad. It brought home to all of us the clash of the different worlds that coexist here on Andros. As we walked on we met local residents of this area. We talked with them about our work and goals and asked them to consider the value of preserving the ancient paths and the benefits brought to Andros from the increased numbers of hikers we have seen in the last few years.

We continued our journey through the settlement of Aprovatou admiring the work of one of the last agricultural producing areas Andros. Then we took the “steni” to Batsi, walking on the magnificent “paved road”, the impressive wide cobbled path that was restored to its former glory when this autumn when we removed the vegetation that covered it with the help our friends from the Netherlands.

Throughout the hike, we checked and recorded the maintenance needs of the route for the coming hiking season

We pruned back new growth where it was blocking the path, we picked up stones and collected rubbish that increased exponentially with each step closer to Batsi. Also, we spent time on ensuring signs were visible along the way. Sometimes by pruning the new plant growth hiding them, sometimes by re-sticking waymarks that had dropped or peeled off.

The day was completed with a delicious meal in Batsi and a heated debate about the disasters on the Andros trails, the indifference of the authorities, their very frequent silent acceptance, and our search for a solution….

The year will not end for us without another hiking trip. It will be announced shortly …!

On Sunday a challenging hike from Paleopolis, to Ano Paleopolis waterfall, ...

Our wishes …
Scroll to top