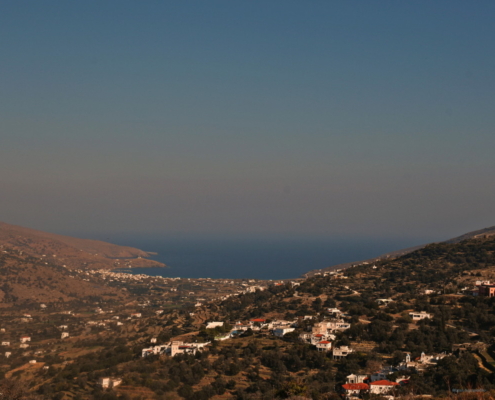 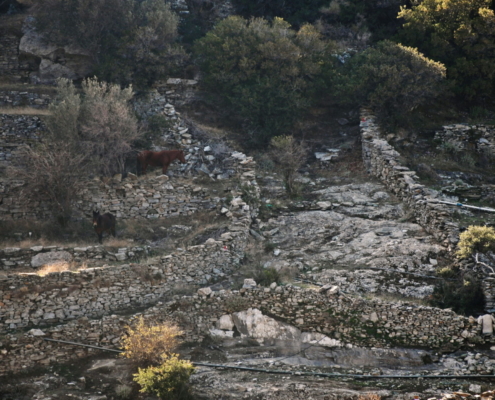 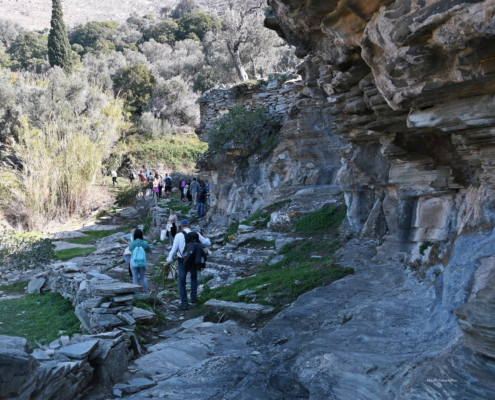 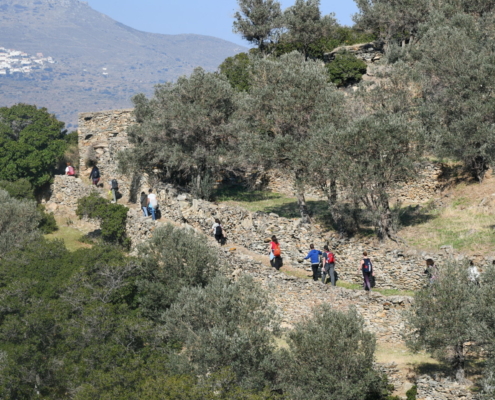 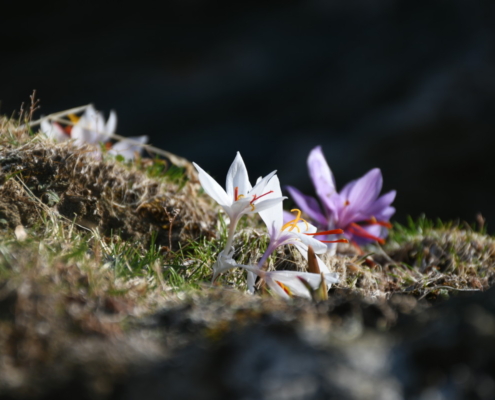 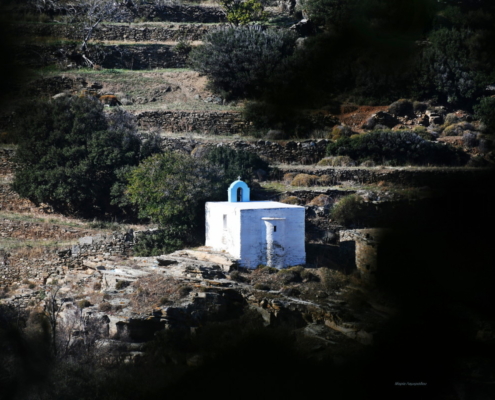 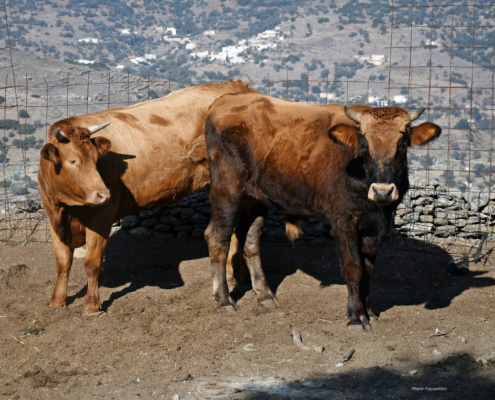 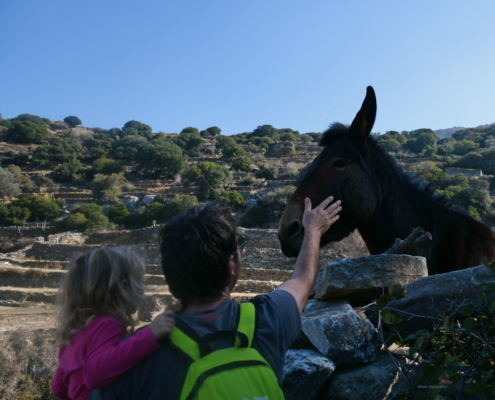 It couldn’t be a more beautiful day! Like spring! This was the weather on Sunday 13 November 2022, the day of the scheduled hiking “Closter of Tromarchia – Piso Meria – Ammonakleiou – Mousionas – Aydonia”… A bright sun, temperature around 20 degrees, clear sky, no wind! No movement of leaves in Andros is a great event in itself!

The sea below Tromarchia looked like a lake, the horizon line was obscured by the glare of the sun, the liner ship glided on the calm sea waters; from all points of view it was an amazing day for any outdoor activity. We chose to do what we love: hiking and taking care of the wonderful network of footpaths we inherited from our ancestors.

We started from Tromarchia and walked along the concrete road until we reached the point where the valley of Korthi – with its villages on the left and right – and the Gialos (Ormos) in the distance were revealed in front of us.

What we first saw seemed to be a summary of the whole route, which is full of hills, dry masonry walls, cultivated land, chapels, huts, oak trees, olive trees, fig trees, blackberry bushes and, of course, the villages of Korthi! 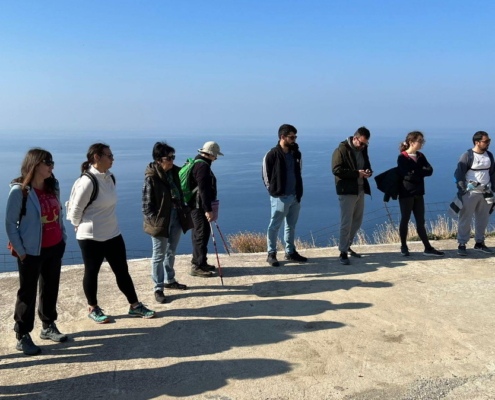 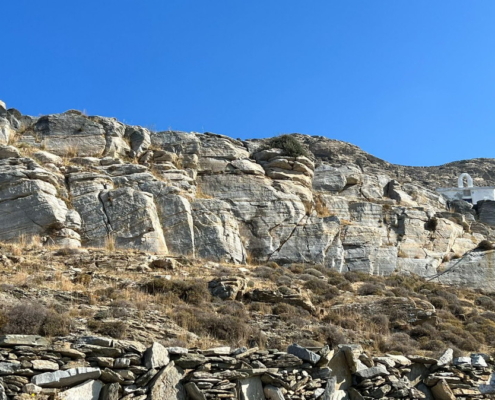 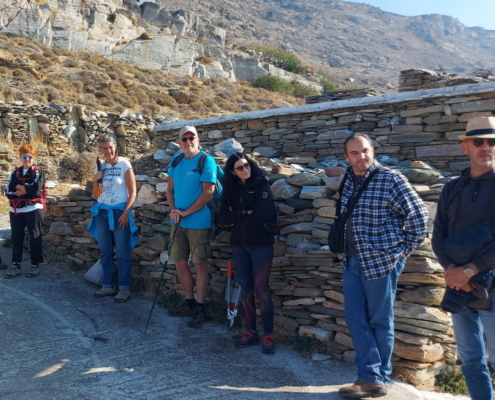 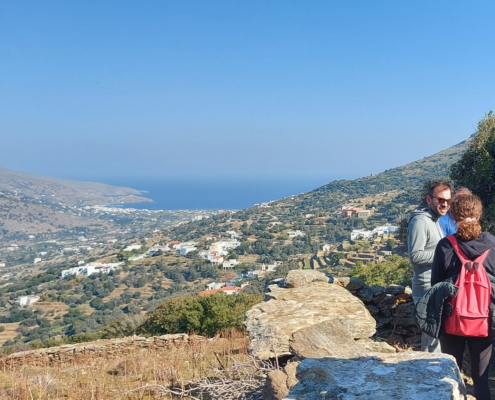 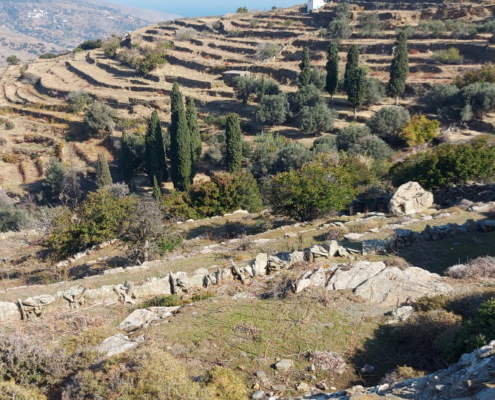 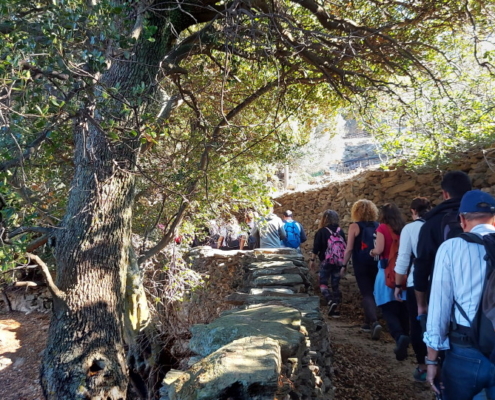 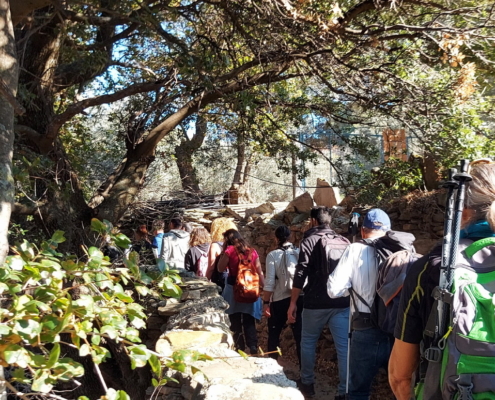 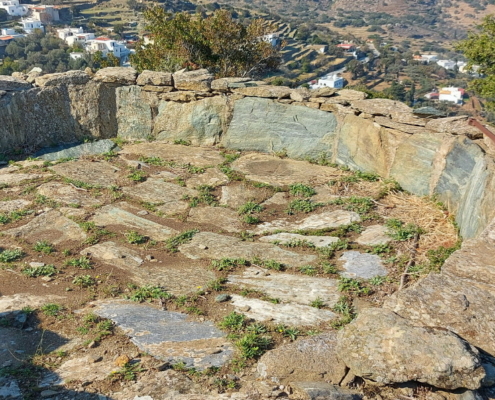 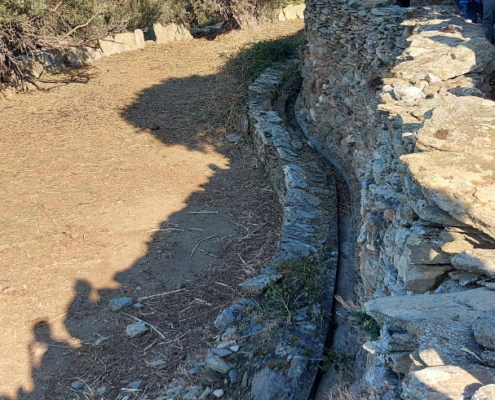 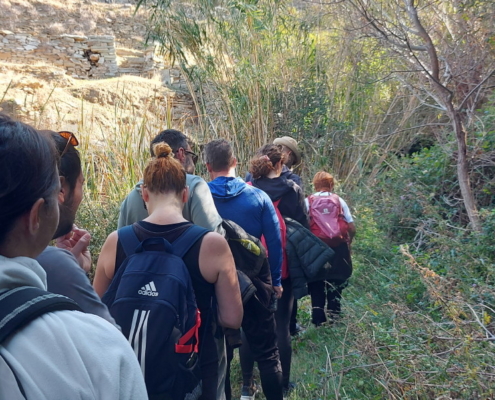 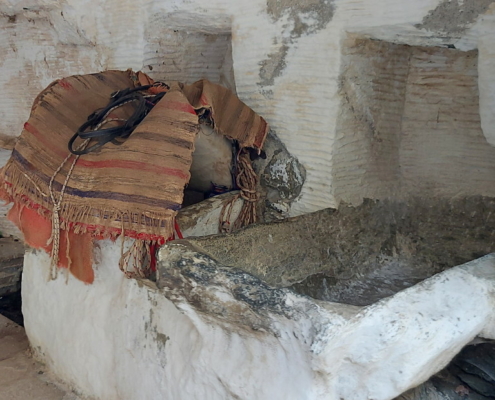 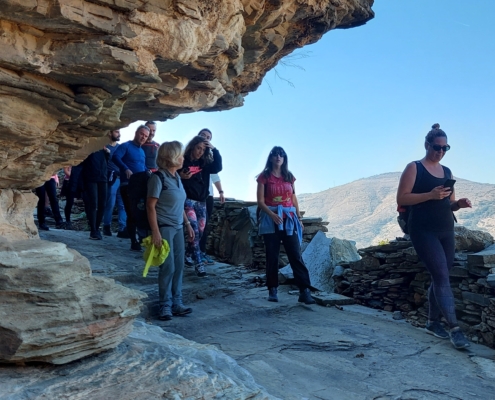 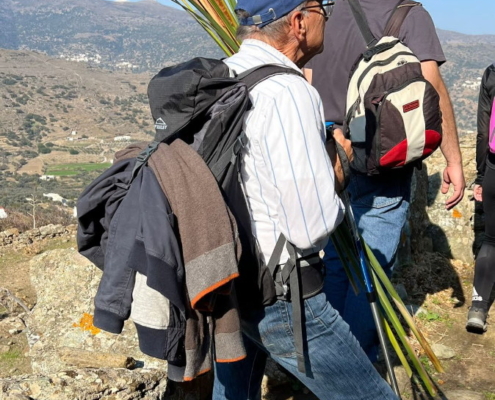 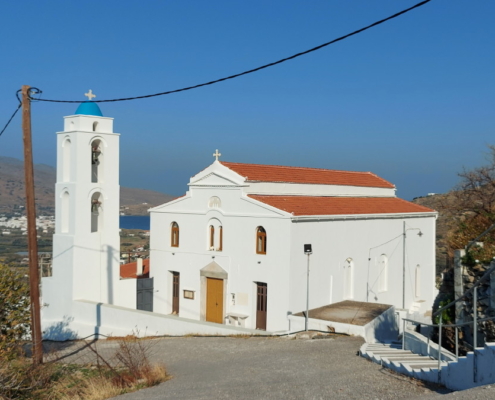 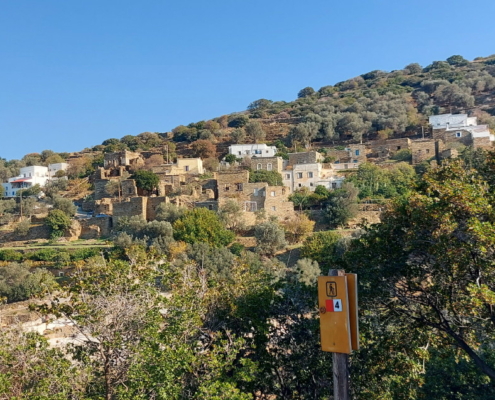 We followed the footpath and the sun was so hot that before the first stream the jackets and coats were hanging on the backpacks. We soon reached a spring and then a stream, climbed a short hill and passed well-made water canals, elaborated “stimata” (large upright stone slabs inserted between the horizontal layers of stones) amazing dry stone walls and large well-preserved stone huts.

We ascended a little uphill, then descended for a while, until we re-entered a straight path between fields, villages with tower houses and drinking springs. These gentle ups and downs of the footpath were like a perfect workout without the fatigue of the steep uphill and the exhaustion of the downhill. These gentle walking variations make the footpath no 4 ideal for people, who are not familiar with long hikes.

The unpaved part of the path was covered with acorns and black oil-filled olives. Next to the water springs, we saw donkey saddles, neatly trimmed and ready to be worn; another sign that this area is still rural.

Soon we reached the villages, passing streets laden with flower pots and courtyards with hanged laundry. We passed Piso Meria and before Nionia we enjoyed our lunch at a wide spot on the path. We wet our shoes trying to cross a small stream and looked into the eyes of mules, donkeys, cows who in turn looked at us in wonder!

We crossed Nionia, descended from Ano to Kato Amonakleiou, saw the medieval facade of Mousiona and finally arrived at Aidonia.

Aidonia is the village near Gialos (Ormos) of Korthi and has several attractions: “Loxo Gefyri” (oblique bridge) , the traditional stone built water fountain with its relief decoration and the Ecclesiastical Museum housed in the Byzantine church of Agioi Saranda, in which religious utensils, old icons and holy books are exhibited.

The condition of the path was in general good, except for a few wild oak bushes that had grown unruly; they got the necessary trimming. It is a fact that paths such as no 4 need little care, just as it is certain that the best way to keep a path clear is by the footsteps of the hikers. People always make the difference, they give life to the stones!

Finally we arrived at Yalos around 3.00 p.m. The smart watch had recorded 14,500 steps and the Yialos was more beautiful than ever! 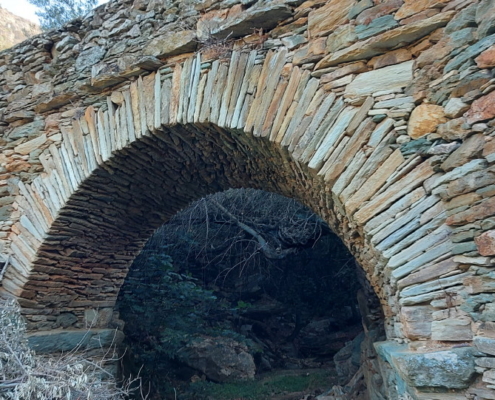 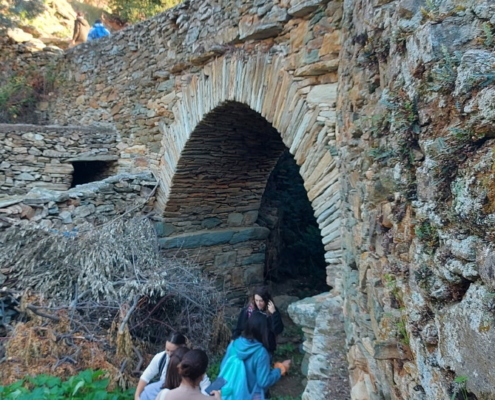 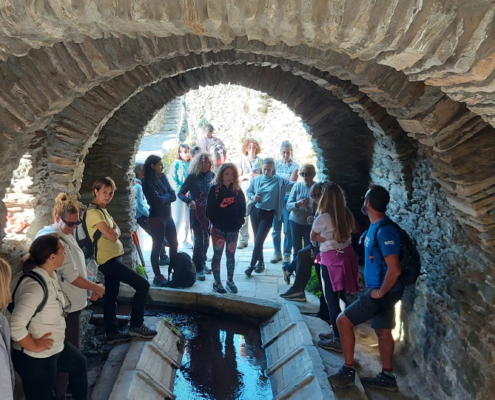 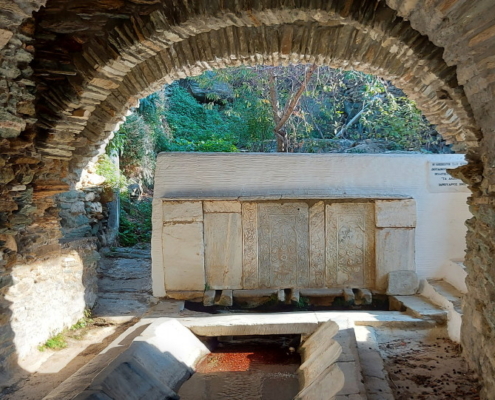 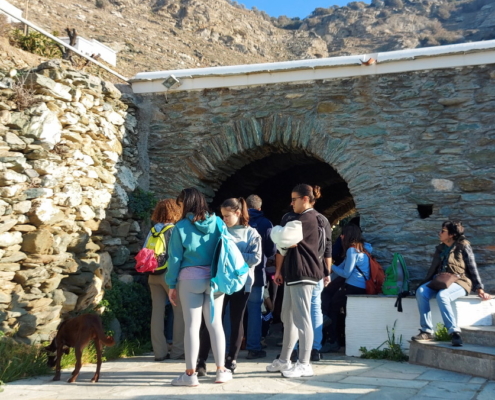 See you on the next hike in the valley of Frousaioi. Let’s dream the route by reading information about footpath no 14 in: androsroutes.gr/gaurio-anwgaurio

Until then and as a training exercise, let’s walk on the footpaths around our homes!

👉 “Loxo Gefyri” of Aidonia:
In Aidonia there is a bridge with the rare technical peculiarity of being oblique, meaning that its axis in relation to the riverbed is not vertical but oblique. Its span is 4,50 m long and the free width of the deck is 2,09 m.
androshistoria.blogspot.com/2015/08/blog-post.html

On Sunday let’s hike at the beautiful route Tromarchia-Piso Meria-Aidonia... 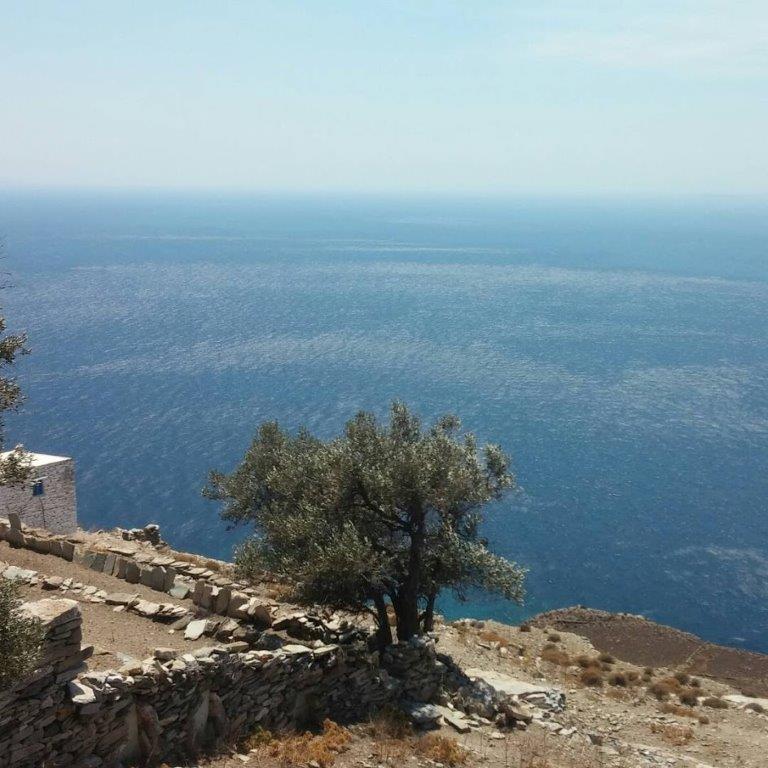 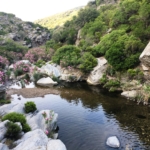