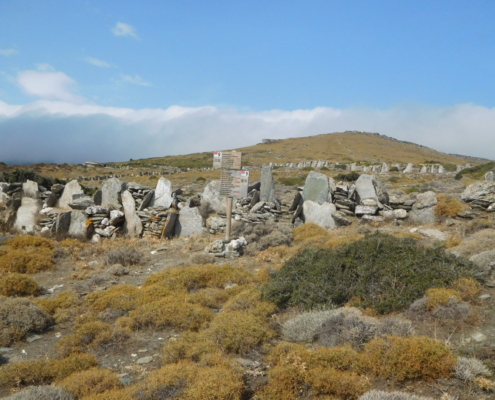 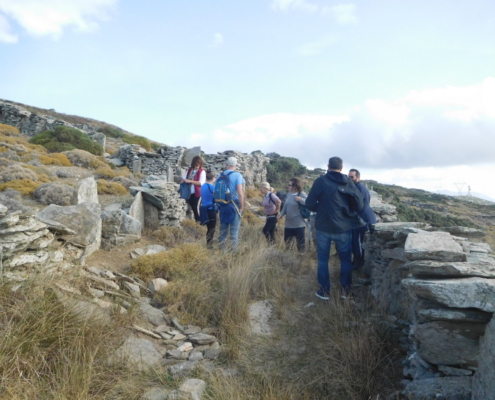 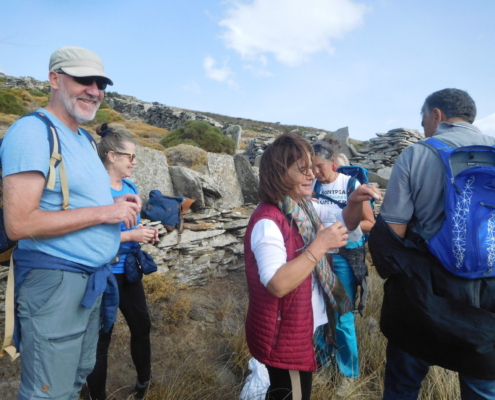 (we are not the only ones to say this; Alan Stobie, Mathias and Christian wrote it)

In the autumn of 2021, two pairs of visitors from Britain and Germany hiked on the paths in Andros (Andros Routes) and sent us a message full of enthousiastic comments. The friends crossed almost the whole island, noted the good condition of the paths, the excellent signposting… and ranked our island to the same top category as the Canary Islands! (La Palma, La Gomera). This comparison gives us the strength to repair the damages done by the recent snowfall, as many tree branches were broken and many stones were detached from the masonry walls; a lot of paths are now in need of restoration. In addition, apart from the description of the paths, the friends wrote us about the destruction of the nature in Andros by “bulldozers” and the installation of wind turbines, which proves once again that you can feel a place only by walking. Our warmest thanks for this message. We hope to meet each other again soon. But read their own words:

You may remember meeting a couple from the UK twice who were walking on Andros, using the bus as transport.

Well, we have just finished our months holiday. In total we walked about 300km (obviously repeating some parts of the walks) and climbed over 11,000 metres – almost one and a half Everest’s.

We had a great time. It would be fair to say Andros is the best walking Island we have discovered in Greece, by a mile. You have done a terrific job to preserve the old routes and make them so accessible. I would rank Andros at least as good as some of the more famous walking islands in the Canaries like La Gomera or La Palma. Without the crowds! Although the potential is huge, I think we met less than half a dozen walkers in the whole month.

I list below the Andros Routes we walked. All were exceptionally well marked. On the odd occasion we missed a turn the Anavasi map, which I bought in advance for my phone and which uses GPS data to show your position, soon set us on the trail. We thought by far the best waking area was centred on the Chora and Korthi, westwards. The old paths with walls on either side were wonderful. If only they could talk. The walking around Gavrio was OK, but less varied. Route 14 would have been delightful had it not been spoiled a bit by wind turbines to the north. There are still a few routes we would like to walk that are a bit more difficult to access using the bus. Hopefully we can get back to do them using a taxi to get to the start.

Some of the old original routes had obviously been bulldozed and it was always a bit sad to come across what at least to us felt like cultural vandalism. The biggest threat to the joy of walking on the island is however industrial wind turbines. It took us a while to work out what “SaveAndros'” was about, but thinking about the wind that sometimes nearly blew us over and the mess that is Evia, it should have been obvious. We hope someone does indeed save Andros.

I record all our walks on the Wikiloc app.

Regards to the Andros Routes team and well done on a terrific effort. Amazing.

Hello dear Andros Routes volunteers, we would like to thank you from the bottom of our hearts.

In September this year we had the opportunity to hike the complete 100km Andros Routes and had a wonderful time.

The beautiful trails were in excellent condition and perfectly marked.

We got to know and love Andros and took away many unforgettable moments.

Please keep up the good work and we look forward to our next time on Andros.

Until then, we remain as Andros friends and hope to support your work with a small donation.

Many greetings from Germany

👉 Would you like to become an Andros Routes volunteer, enjoying this beautiful nature while taking care of one of the way marked routes of the network?
🌐 www.androsroutes.gr/forma-aggelwn and we’ll get in touch!

On Sunday let’s hike together on the beautiful route Piso Meria – Prophet...
Scroll to top