Invitation to mushroom tour at Arni ! 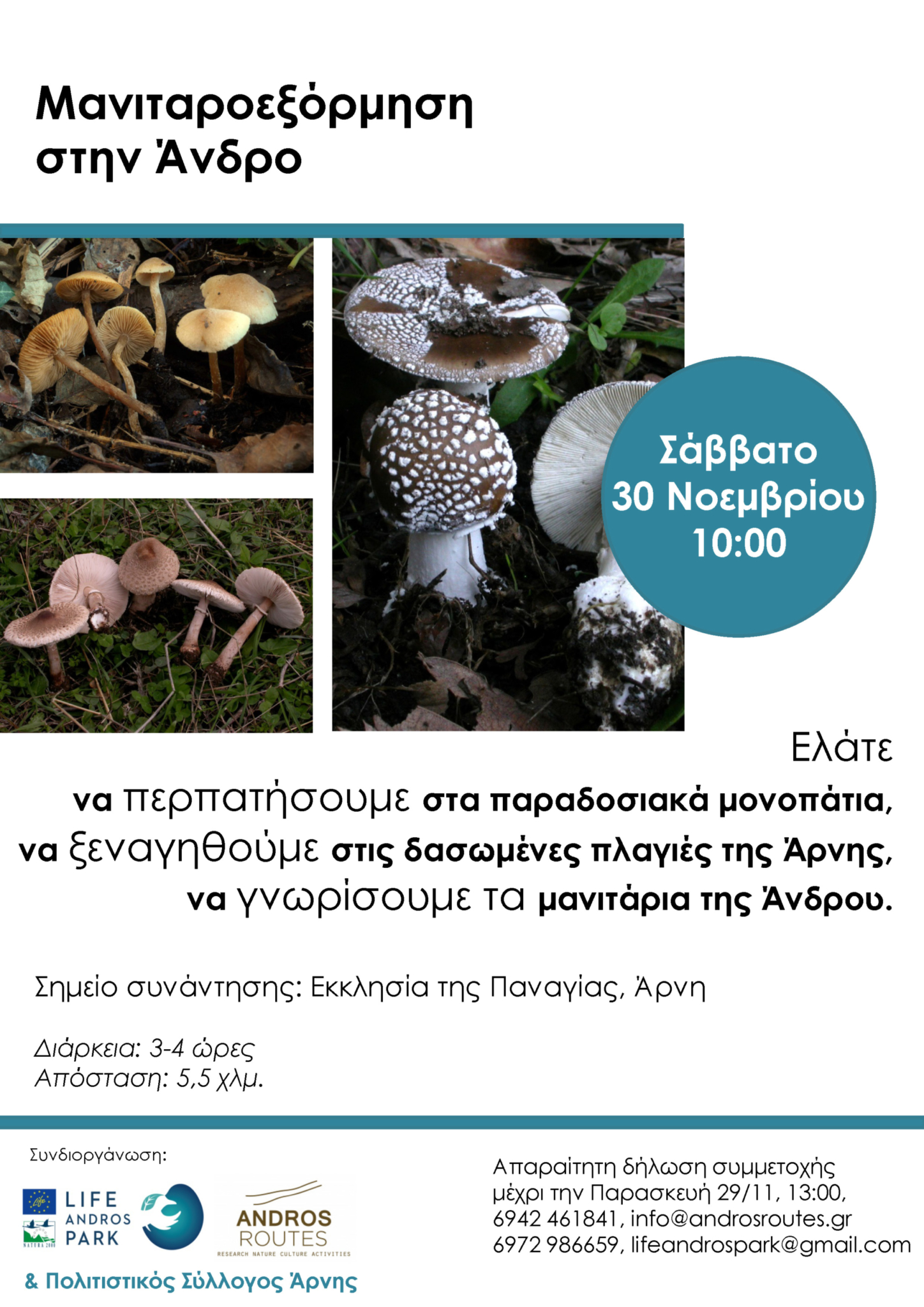 The LIFE Andros Park project team in collaboration with volunteers of the Andros Route initiative and the Cultural Association of Arni organize an excursion to search, collect and identify mushrooms of Andros and invite you to join.

The excursion will take place on Saturday, November 30th, at Arni and Remata regions. The meeting point will be the church of Virgin Mary at Arni, next to the headquarters of the Cultural Association of Arni, at 10.00 am.

Our hike will be divided into two parts:

Andros receives the largest amount of rainfall  among all the Cyclades islands, maintains a significant number of small streams with aquatic plants, but also hosts extensive areas with residual clusters of deciduous and evergreen broadleaf trees. This combination of vegetation and climatic conditions results in a large number of mushroom species of. In addition, Andros is the most thoroughly studied Aegean island, in terms of diversity of mushrooms. A systematic study of mushrooms of Andros that started in 1993 by fungiologists of the Agricultural University of Athens has so far led to the registration of more than 400 species, including four that were first described on Andros.

During the excursion, mushrooms will be collected under the guidance of Dr. Ilias Polemis (AUA research associate), while selected speciments of particular interest will be presented in greater detail at the end of the walk. The total duration of the excursion is estimated at 3-4 hours and will cover a distance of approximately 1 km (first part at Remata) and 4.5 km (second part at Arni), walking on the routes 13 and “Arni circular” (Ar1) marked by Andros Routes initiative. Please wear closed shoes and bring with you drinking water and a snack!

Our excursion is aimed at anyone interested in the mushrooms of Andros, families, young people, adults and children.

Important information: The organizers have set a limit of participation in the excursion. Therefore, only those who register early and who have received written confirmation from the organizers will be considered eligible.

A strict order of priority will apply.

On Sunday let’s hike together …Tromarchion Monastery-Aidonia-Ormos...
Scroll to top