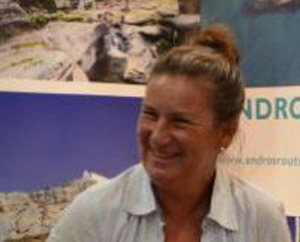 Ulli, an Andros resident for over 20 years, made the decision to live on Andros after her first visit! Before coming to Andros, Ulli worked in finance in Germany, for a major bank. In 2012 Ulli joined the Andros Routes team, where she has been a passionate and active contributor. Ulli enjoys walking and working on the ancient footpaths, together with a group of people who are as enthusiastic about nature, environment, wildlife, sustainability, the island’s history and culture as she is. As well as being responsible for an Andros Route, Ulli was a key member of the organizing team for the two Andros “On Foot” Festival, leading the volunteer efforts. She also organizes participation in hiking exhibitions abroad. Ulli is fluent in Greek, English and German.