Andros Island sits at the northernmost tip of the Cycladic archipelago, in the midst of the Aegean Sea about 2 hours by ferry from the Greek mainland and a similar distance from Mykonos island. Ferries to Andros from the mainland leave from the Port of Rafina 10 miles by road from Athens Airport and 20 miles from Athens city centre. Ferries from Rafina all travel on to Tinos Island and Mykonos and back again.

Train to Andros in 48 hours or less 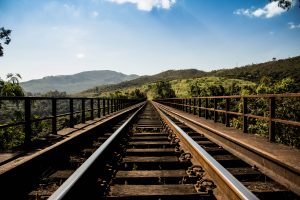 Relax and take the train

We would encourage everyone to travel to Andros by train. Faster than you might think, a better environmental option than flying and surprisingly affordable if booked ahead, the train adds another dimension to your trip. All the information you could ever want about routes and how to book tickets by train to Athens can be found on Mark Smith’s excellent and encyclopaedic website The Man In Seat 61. Although The Man in Seat 61 gives advice on travelling by train from London, using his core routes and some of the resources on the site, you can plan travel to Andros by train from other European cities.

Please use The Man in Seat 61 to plan your trip to Patras or Athens and use our guide below to get to Andros.

The fastest train route to Andros is via the ferry from Bari in Italy to Patras on the western coast of Greece. It is possible to get from Patras Ferry Terminal to Andros by public transport or by a combination of taxi and public transport. However, if arriving at 13:00 in Patras on the ferry from Bari there isn’t enough time to make the 17:30 ferry from Rafina to Andros. If taking this route and you want to make it to Andros on the same day you need to plan to travel on a day with a late ferry from Rafina to Andros, usually Fridays, Sundays, Bank Holidays and in the peak summer season. Use www.openseas.gr to search for late ferries to Andros. On days without a late ferry plan to stay overnight in Rafina (see Flying section below for Rafina accommodation information) and take the early ferry in the morning. Alternatively, travel Patras to Athens and stay overnight in Athens.

The Patras to Andros route is as follows:

If leaving a train on the outskirts of Athens and waiting at a bus stop on a main road isn’t for you, take the train all the way to the airport. From step 3…..

3. From Kiato station take a train towards Athens airport. The timetable is HERE

4. Get off the train at Athens airport

5. Take a taxi or the direct Airport/Rafina bus to Rafina (see instructions on tab below for details of how to get to Rafina from the airport). 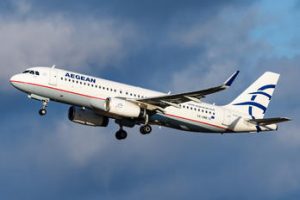 There is no airport on Andros but there are easy connections by ferry from both Athens airport (ATH) and Mykonos airport (JMK). For travellers from the UK, British Airways, Aegean, Easyjet and Ryanair all have direct flights to Athens airport from London and regional airports including Manchester and Edinburgh.

Flights to Mykonos vary depending on the season with many more options between May and October.

If you are prepared to make one stopover on route there are many more flight options with European airlines.

To find the best price we recommend searching the airlines own web sites and using flight search engines such as Google Flights , Kayak or  Skyscanner.

From Athens airport it is about a 30 to 40 minute ride by taxi or bus to the port of Rafina where the ferry takes 2 hours to Andros. Ferries usually leave in the morning around 7/8am and in the evening around 5.30pm. There are additional ferry services at the weekend and in summer.

Stay overnight before ferry from Athens/Rafina

If you arrive at Athens airport in the evening with the intention of catching the morning ferry there are two hotels in Rafina that offer accommodation. The Avra Hotel (currently being refurbished and due to reopen in March 2017) and the Corelli Hotel. Alternatively there is the more expensive Sofitel at the airport or many options for accommodation near to Rafina on Airbnb.

There is always the option of combining your visit to Andros with a stay in central Athens either at the start or end of your trip.

From Mykonos airport it is about a 15 minute ride by taxi or bus to Mykonos port where the ferry takes around 2 hours 20 minutes to reach Andros. The ferries usually leave in the morning around 7/8 am and the middle of the day around 1pm. There are ferries later in the day at the weekend and in summer.

Stay overnight before ferry from Mykonos

There are plenty of options for overnight accommodation in Mykonos. Staying in or around Mykonos town will place you close to the ferry for a quick departure next day. Try Booking,com or TripAdvisor

Airport to the Ferry port

Athens Airport to the port of Rafina for ferries to Andros

Athens airport is approximately 16km from Rafina where ferries leave for Andros. A taxi from the taxi rank directly outside the Arrivals Hall will get you to Rafina in 20 to 30 minutes. The cost will be around 25€ to 40€.

There is a reliable bus service directly from Athens airport to the ferry port in Rafina. The bus costs 4€ and takes about 30 to 40 minutes.

The bus leaves from the furthest roadway outside the arrivals hall. To get to the bus stop leave Arrivals by Door 3 (between Alpha Bank and Airport Information), cross over over the covered roadways towards the Sofitel Hotel. After passing the escalator to the upper level turn left towards the orange bus stop pole. Buses are clearly marked with an alternating Rafina/Ραφινα electronic sign on the front of the bus. There is a timetable on the bus stop pole. 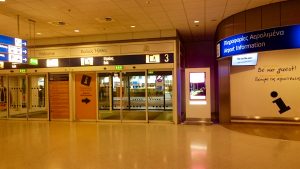 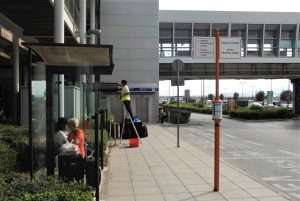 Mykonos Airport to Mykonos New Port for ferries to Andros

Mykonos airport is just 4km from the ferry port and a similar distance from Mykonos Town.

Taxis leave from opposite the exit door from international arrivals. A taxi  to the New Port where ferries for Andros depart will take around 15 minutes and will cost approximately €15.

A taxi to Mykonos Town also take about 15 minutes and costs €15.

Taxis leave the New Port(where ferries arrive from Andros) from just beyond the end of the port buildings, the same place where the drop off.

The Mykonos bus service operates in summer months to coincide with the seasonal flights to the airport. The Mykonos bus timetable changes frequently so it is always best to check the timetables posted at the bus stops or on the KTEL Mykonos website at the link below

The bus from the airport to Mykonos New Port leaves from outside the domestic end of the terminal building. It costs €2 and takes about 15 minutes.

Take a bus to the Old Port (on the edge of the pedestrian centre of Mykonos town). The bus takes 5 to 10 minutes and costs €1.60

There is a small ferry that operates between the New Port(where ferries arrive and depart for Andros) and the Old Port (it stops right on the edge of the pedestrian area of central Mykonos Town). The fare is €2. More details at the link below: 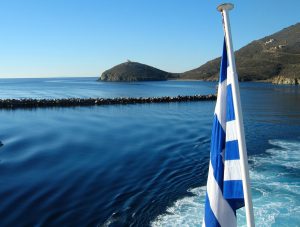 The ferry times vary according to the season. There are less ferries in winter and more in summer.

Ferries leave in the morning around 7/8 am and in the evening around 5.30pm. At the weekend and during the summer months there are more ferries e.g. an additional later ferry on Friday. The ferry from Rafina to Andros takes 2 hours. The cost of a single ticket is €19

Ferries leave Mykonos in the morning around 7/8am and in the afternoon, usually around 1pm.  The ferry from Mykonos to Andros takes about 2 hours and 20 minutes. The cost of a single ticket is €15

Openseas searchable ferry timetable – Openseas has an up to date searchable timetable for all departure and destination points on the Andros ferry route.

You can book tickets on-line through Openseas but the physical tickets will need to be picked up at one of the ticket agents in the port. Golden Star ferries have recently launched  a smartphone app (details for ios here and android here) for online paperless tickets for travel on both of their ferries. Alternatively tickets can be purchased from a ticket agent in the port when you arrive to take the ferry. There are many of these in Rafina and one ticket office in the new Mykonos port.

Some of the ferry operators offer reduced prices for return trips but usually only if you return on one of their ferries. Check at the ticket office for these deals. Alternatively you can buy tickets for your return journey on Andros at ticket agencies at the port and in the main towns. Use the Openseas timetable to plan your return journey.

The Marine Traffic website shows  the current location of all shipping on a map. Ships marked blue are passenger ferries. Clicking on a a blue marker will reveal the name and other information on the ship.

Car or motorbike hire, Taxis and Buses are all available to help you get around. Walkers taking linear routes where they end up in a difference place from the start of their hike may use all three at some point during their stay. What solution you choose will depend on your own preferences including convenience, cost, the length of your stay and where you plan to go. For example, if you are planning eight or less trips by car during a week’s stay using a taxi may be cheaper the car hire.

Cars/motorbikes can be hired in the port of Gavrio. There are several companies offering this service.

The bus service is run by KTEL Andros. The bus runs between the Ferry Port of Gavrio and the other main towns on the Island, Batsi, Chora and Ormos Korthi. The bus timetable is set to the arrival/departure of ferries so it will vary to reflect the seasonal increases and decreases in the number of ferries throughout the year. There will always be a bus waiting at the ferry port to pick up passengers leaving the ferry and take them along the Batsi, Chora, Ormos Korthi route.

In the summer there are additional bus services to some of the smaller villages. It is best to check locally at the bus station for timetable information.

If you need a taxi when you arrive on the ferry in Gavrio there is a taxi stand outside the port gates. Taxis operate all over the island and can be called by phone to pick you up. Not all the taxi drivers speak English so it may be worth asking locally for some help with translation. Having a paper with useful phrases in Greek may be helpful.

If you are a travel company organising trips to Andros, please get in touch.

Last but not least: feel free to ask our accommodation partners on Andros to help with transport of you or just your luggage to your next location on the island.

There is an extensive variety of places to stay on Andros from hotels to rented rooms. Obviously we would like to promote our partners, who are specially equipped for hikers. Please find more details on our partner pages

Try tripadvisor.co.uk as a guide