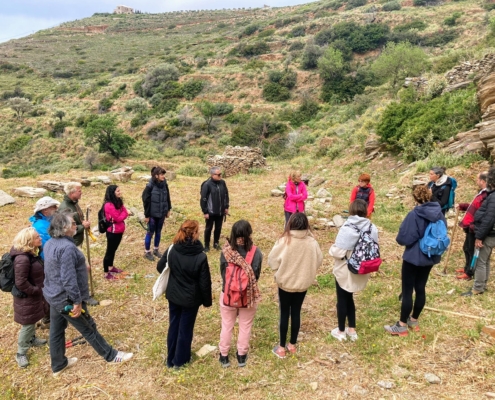 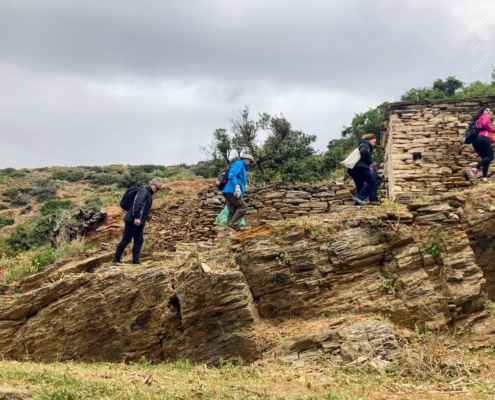 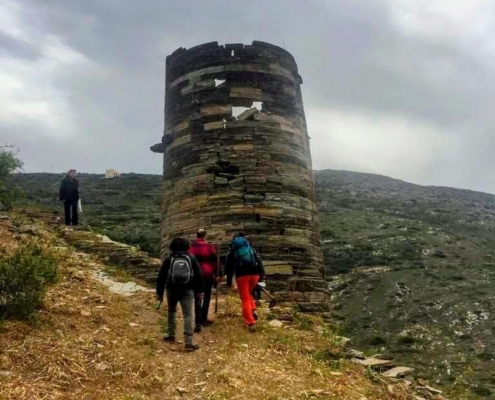 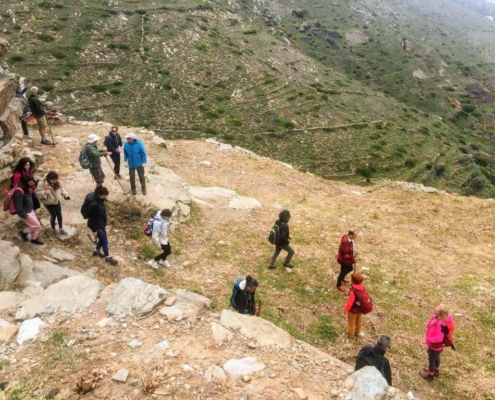 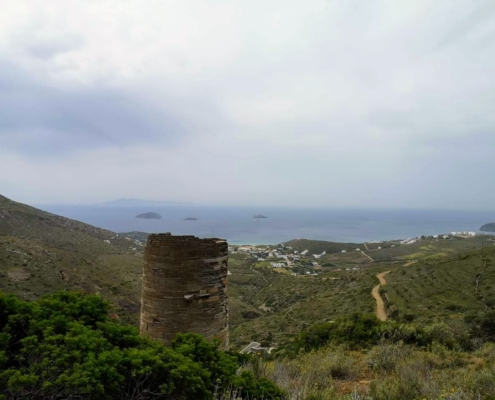 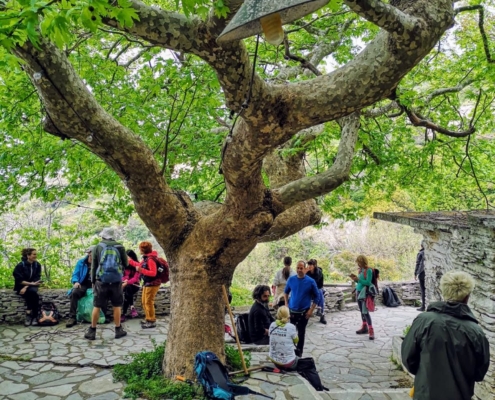 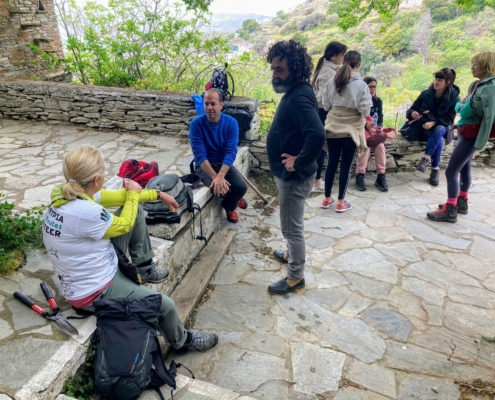 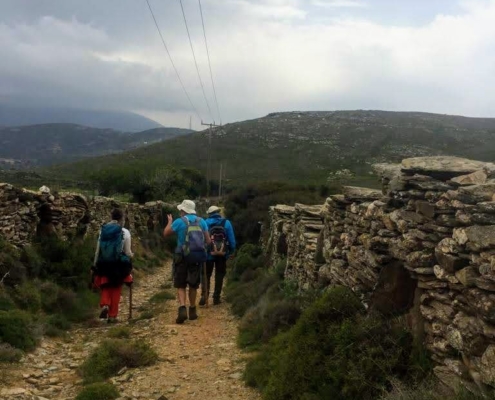 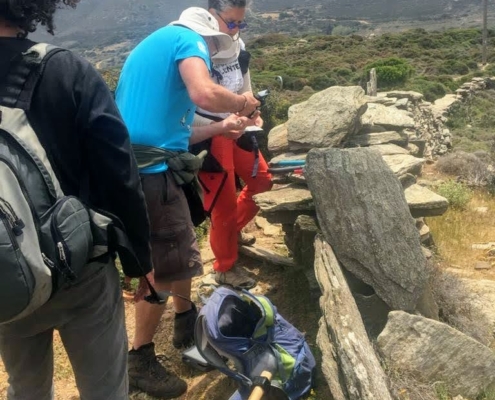 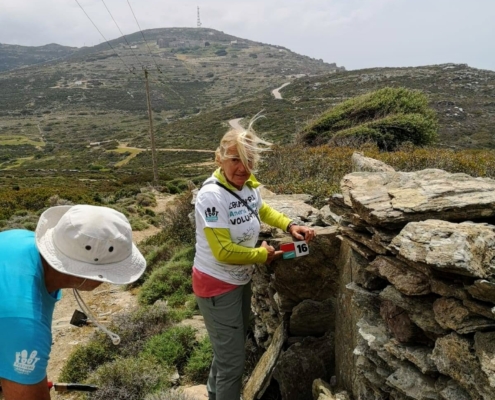 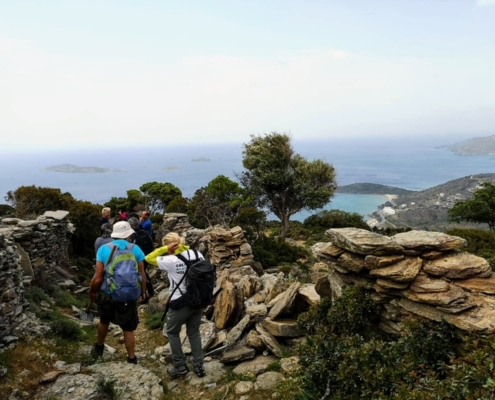 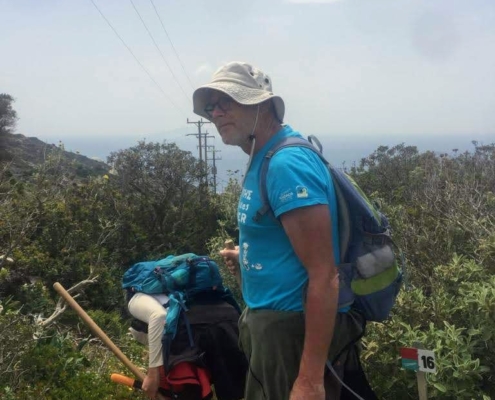 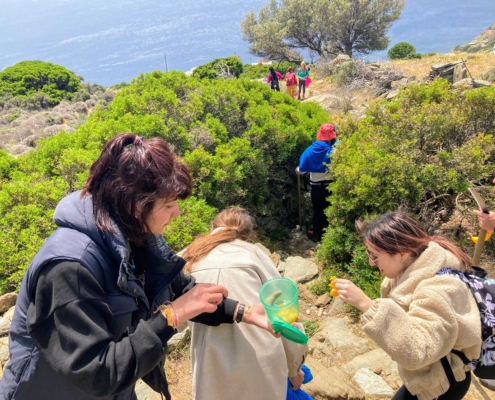 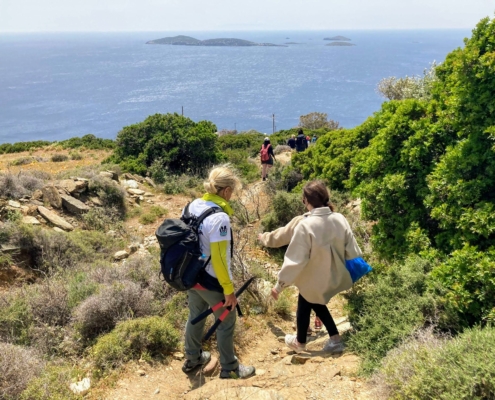 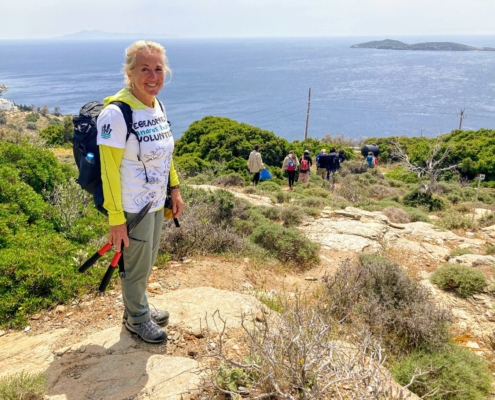 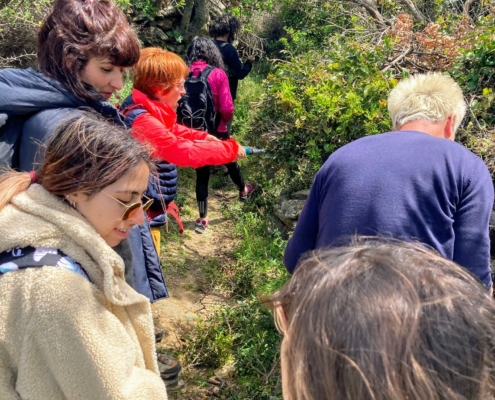 A colourful, fragrant mosaic of persons and objects is how one could describe the latest maintenance hike of ANDROS ROUTES.

08/05/2022 , 10.30 a.m, the meeting point was set at Batsi and the starting point of the hiking (footpath No. 15 combined with a part of footpath No. 16) was the legendary Tower of Agios Petros . The nature spread around in a variety of colours, the red from the poppies and the yellow from the asparagus dominating. The group was multinational and national; there were hikers from Israel, America, The Netherlands, Athens and Thessaloniki (all eager to discover our footpath network) and of course the lucky ones staying permanently in Andros.

Hence, a combination of persons began to hike in a combination of colors of the spring Andriotic nature, following a combination of footpaths, starting from the Tower of Agios Petros, with unobstructed views to the valley and the sea that stretches ahead, to end up at the famous Batsi , through an uphill route to the Monastery of Zoodochos Pigi or Agia and then through a downhill route, following the rural footpath, which according to local testimonies, has been for more than a century the way of the farmers to the winter and summer pastures of their herds.

Highlights of the route, (apart from the much-discussed by archaeologists and scholars Tower of Agios Petros), was the spring at the village square of Ano Agios Petros with the platan tree, where we filled our bottles with fresh water for the hiking, and the view that stretched constantly in front of us as we were descending to Batsi, after leaving the monastery of Agia.

And it goes without saying that the enthusiasm of the group and the pulse of the hiking passed through the photos taken , which “flowed” for the sake of social media , as we heard from our volunteer in charge of social media , who chose the photos for publication and wrote characteristically: “… “I observe the photos as if I were walking with you, feeling the wind and the fatigue of my legs, breathless uphill, running like a little girl downhill… feeling tired and wondering when it will end…. However, while you are walking, I am lying on my back on the couch with my cellular phone in my hand… listening to the sounds of my house, of the city…. slowly filling my suitcase …. because I want to come not to you… but with you!” .

And of course we want you all to join us, to become one big hug around and inside the hiking network of Andros in order to make our Dream come true….
Tune in with us on social media and prepare suitcases and backpacks for the next weekend!!! 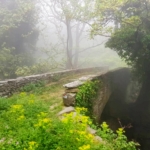 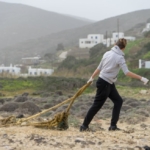 Let’s clean together the wonderful beach of Ateni… and have a s...
Scroll to top